The Difference Between American and European Showline German Shepherds

European Showline Shepherds are shorter and stockier than their American counterparts. They also have more masculine heads and richer coloring. "Red and black" is the most common coloring. Black, sable, and others are allowed in the standard, but not white.

Contrary to American lines, the European Shepherd has a stronger emphasis on temperament and ability when it comes to showing and breeding. The goal of the SV is "To create a very high level of serviceability." Thus, there are high standards and regulations regarding health, conformation, and temperament in Europe that a German Shepherd must meet in order to be allowed to breed. Those three categories all work together in contributing toward a dog's "serviceability"; each is thus of equal importance and a dog is inhibited if lacking in any.

It's important to note that due to these extensive health and temperament standards, the cost to breed a European Shepherd well is highly expensive and thus the cost of a good puppy is also high. It's worth the investment, however, when it comes to the emotional benefits a well-tempered and trustworthy dog provides; combined with good health for a long-lasting relationship. The following true of any breed: a badly bred dog that is prone to genetic disorders and disease ends up costing the owner more in vet bills in the long run as opposed to purchasing a healthy pup in the first place. This doesn't even count all the hassle; frustration; and expensive and time-consuming attempts at behavioral correction that often results from purchasing a badly bred and poorly raised pup. 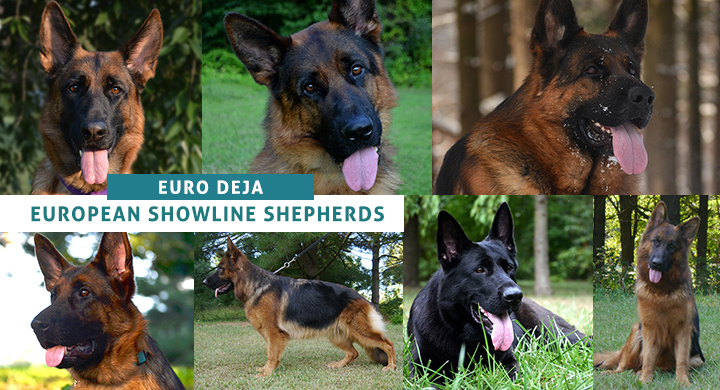 The American German Shepherd’s coat is usually tan or silver combined with black markings. There are also white shepherds allowed in the breed standard. There is less distintion in the heads of males and females as both are more narrow and refined. The AKC German Shepherd breed standard was originally developed almost by personal preference in regard to physique. The shows do not focus equally on temperament as in Europe.

The American German Shepherd is much more common and less expensive in the U.S. Unfortunately, the easy accessibility often leads to irresposible breedings. While there are well-bred American lines from respectable breeders, due to backyard breeding the average American shepherd has personality and conformation far from the standards. Health issues and unsound temperaments also arise because of careless breeding. It's not uncommon to hear stories of families purchasing an American Shepherd pup and training it well, only to have the dog grow to be unsafe and aggressive around its own family. This is a serious flaw in the temperament and is due to poor breeding. "Pure Bred" or "AKC papered" means nothing; "Well-bred" means everything.