What is Degenerative Myelopathy (DM)?

Degenerative Myelopathy (DM) is a devastating neurological illness without cure known to affect the German Shepherd breed. This form of spinal paralysis is associated as the canine version of human Amyotrophic Lateral Sclerosis (ALS).

According to OFA only 52.5% of German Shepherds test clear, 31.6% are carriers, and 16% are at risk. The affected dog, once showing signs of the illness, has an average of one year left to live. There is no cure, but many claim that healthy exercise and acupuncture can help prolong the life of the affected dog.

To test whether or not your dog is losing its awareness and control of its rear legs, you can do a simple, non-intrusive, at-home test. Have your dog in a standing position and slightly lift one of its back legs. Cup the paw and bend it backward at the dog’s wrist then place the paw in this position back on the ground. An affected dog will leave the paw bent backward on the ground. An unaffected dog will correct the position.

Is the DNA test for Degenerative Myelopathy (DM) Reliable?

The controversy of the disease lies in the health testing. The DM test for German Shepherds is a relatively new development and many claim that the test is not reliable. Certainly, it can be understood that no health test is 100% reliable. In which case, breeders can claim that testing for any health issues is unnecessary.

Those who are claiming that no DM testing should be done because of the “unreliability” are using the claim as an excuse; they do not want to know the results of their own breeding stock. You’ll notice that these same breeders are testing for hip and elbow dysplasia. They are exercising contrasting principles in their own standards depending on what they can get away with. For indeed, the dysplasia tests that they use are “unreliable” by their own standards.

Certainly, the current method of testing for dysplasia is arguably even more unreliable than the DM test. Right now, dysplasia is monitored with x-rays of the parents’ hip and elbow joints before breeding. However, dogs with severe dysplasia are regularly being born of cleared parents with generations of cleared dogs in their pedigree.

Additionally, many dogs that are diagnosed with hip dysplasia do not show any clinical signs or discomfort. We have even witnessed this ourselves; we bought a pup from another breeder and it developed severe dysplasia despite generations of cleared parents. Still, the dog shows absolutely no signs of discomfort or dysplasia. This so-called "unreliability" does not, by any means, suggest that testing for dysplasia should not be done. Such a ridiculous claim would cause a shockingly larger percentile of dogs diagnosed with dysplasia because breeding stock is not being tested. In affect, there would also be a larger percentile of dysplastic dogs that exhibit clinical signs of the joint disformation. This merely points out the discrepencies of breeders that refuse to test for DM because it is unreliable, but still screen for dysplasia. For what we do know is this: dogs that show clinical signs of dysplasia, have dysplastic joints. That's easy enough to understand. Likewise, according to the CGD (Canine Genetic Diseases), “dogs that have clinical signs and a confirmed diagnosis of DM have tested as genetically affected.”

The reasoning behind the claims for unreliability lay in the published results identifying the DNA mutation for DM. The CGD Network (Canine Genetic Diseases) summarized the publication results and they state that the identified “DNA mutation…is a major risk factor for development of degenerative myelopathy in dogs” and that “having two mutated copies of the gene does not necessarily result in disease.” So then, controversy #1 is that two copies of the DNA mutation does not always result in DM. This is the groundwork for breeders claiming unreliability of the test. However, if you look at the OFA grades for DM, A/A stands for At Risk when the dog has two copies of the DNA mutation. It does not stand for “Affected.” As it stands, At Risk is a reliable grade.

Controversy #2 comes from the fact that the OFA honestly states that 2 dogs out of the hundreds that underwent study were confirmed to have DM while testing clear. However, 2 dogs out of hundreds is an extremely low percentile. As for carriers, the OFA says that they “are far less likely to develop DM, but we have confirmed DM in a few carrier dogs.”

What is certain is this: dogs that are DM clear or DM carriers rarely develop degenerative myelopathy. Those that test At Risk have an extreme risk of developing the disease. Therefore, breeding stock should be screened and paired so that the puppies are not At Risk (A/A).

The Symptoms of Degenerative Myelopathy

Crisis — Immediate veterinary assistance needed regardless of the disease

An Infograph to Help You Remember 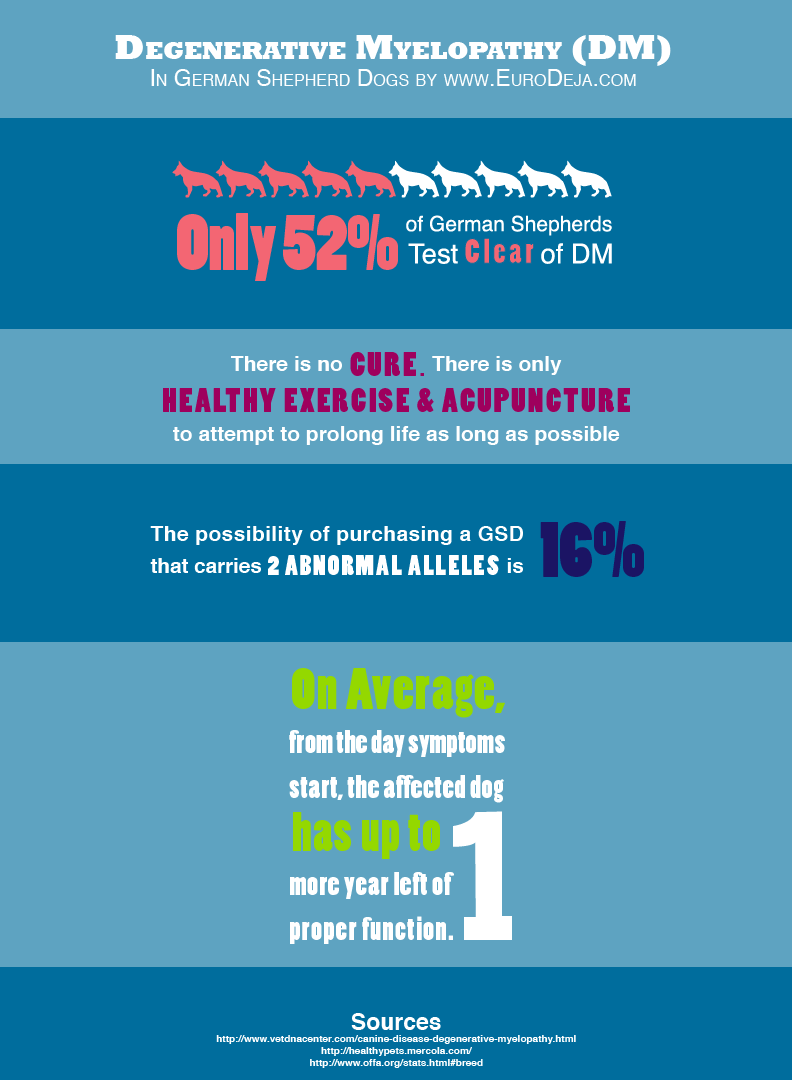