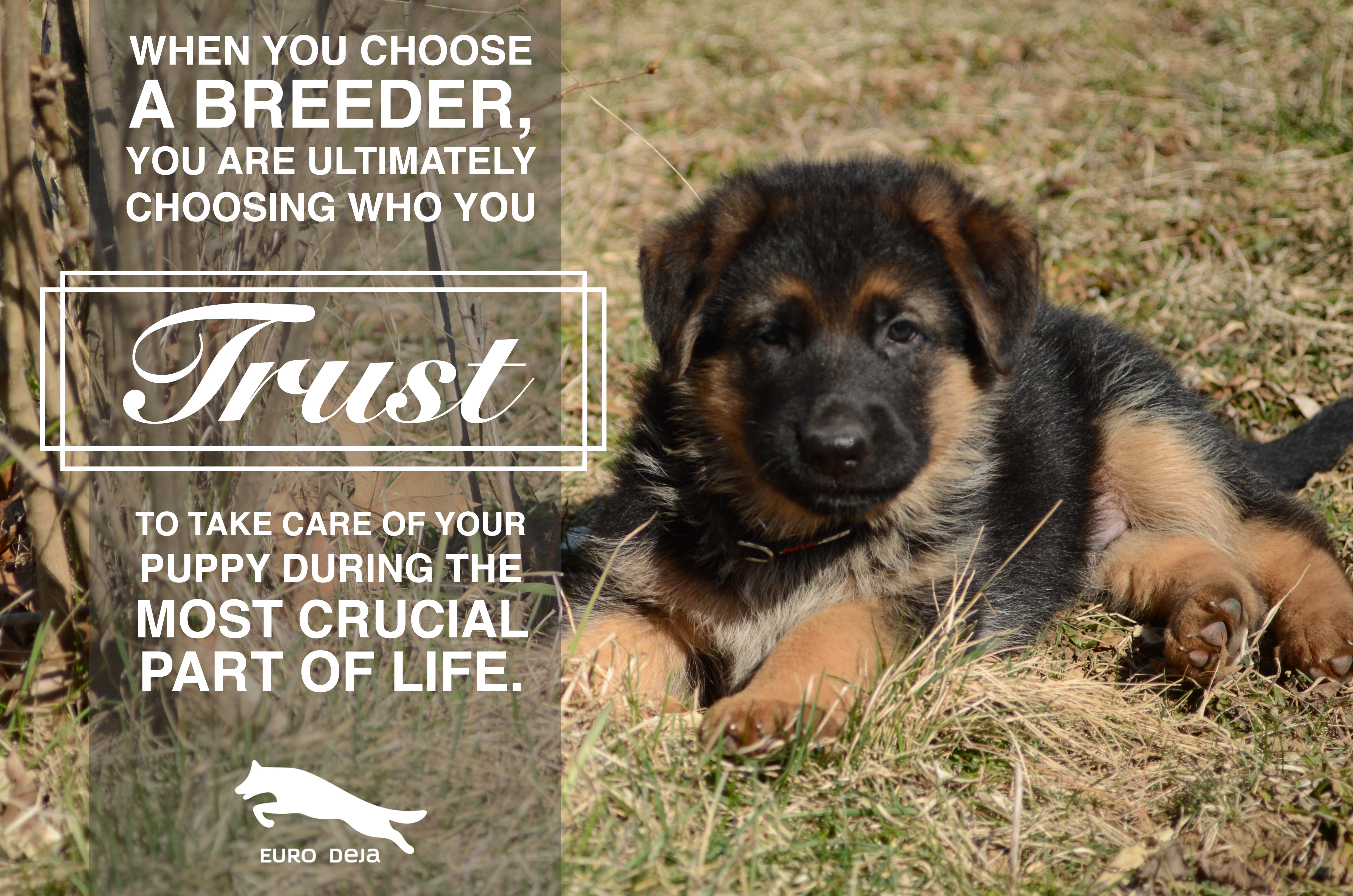 Evaluate: Are the puppies handled often throughout every day? Are they introduced to safe and positive situations and carefully guarded from negative encounters? Are they used to many different people or are their human encounters limited to only a few individuals?

This is extremely important for any puppy, but especially for breeds like German Shepherds who have a natural instinct to protect.

A poorly socialized German Shepherd is an unstable dog; they are prone to either fear or aggression instead of protection.

Ask: What kind of food do the mother and puppies eat?

Evaluate: Are the puppies over or under weight?

Poor nutrition will lead to devastating consequences later in life. This is especially true of large breeds that are commonly affected by dysplasia. Did you know that environment is more important than genetics when it comes to joint development? It’s true! And one important factor in the environment is their food. Puppies that are overweight have a higher risk of dysplasia later in life. Similarly, puppies that are underweight are not receiving enough nutrition for their joints to develop properly.

Ask: Where do the puppies live? What is the flooring? How often do they play outside?

Again, environment is key when it comes to dysplasia. Studies show that puppies that are raised on hard surfaces are more prone to dysplasia. Also, puppies that often exercise on uneven, soft surfaces (such as the yard) have less risk of developing dysplasia. It is also shown that where the puppies live and exercise is most important during the first 8 weeks of life.

Ask: What health tests do you require before you breed your dogs?

While additional tests are advantageous, the two most important health tests to consider for a German Shepherd are dysplasia (hips and elbows) and Degenerative Myelopathy (DM).

The parents should have PennHip, OFA, or A stamp ratings for both the hips and the elbows. X-rays “evaluated” by the breeder’s vet are not sufficient. Veterinarians are not orthopedic specialists and often make mistakes. As a personal example, a friend had a dog x-rayed and their veterinarian declared the joints were “good”. They sent the x-rays to OFA (Orthopedic Foundation for Animals) and got a call stating that the x-rays showed dysplasia.

They must be tested for Degenerative Myelopathy (DM) and paired so that none of the puppies are “At Risk”. This can be accomplished fairly easily and yet many breeders don’t test for this disease. A well-educated and responsible breeder should be able to tell you a litter of puppies’ DM results based upon the parents.

Truly good and dedicated breeders are breeding in order to improve their lines. If they are not meeting basic standards of the breed, what other standards are they not following?

Evaluate the parents, yourself! Do the ears stand by themselves? Do they have black skin pigmentation around their eyes and on their nose? Do they have any major conformation flaws? With the sloped back of the American and European show line German Shepherds, one thing to look out for is to make sure the back is not higher than the shoulders.

Ask: Are the parents schutzhund titled?

The sport of Schutzhund was designed as a temperament test for the German Shepherd Dog. It comes highly recommended, yet is not completely necessary. Many breeders have wonderful dogs that could be Schutzhund stars, but they do not have the titles simply because of the fact that it costs upward of 10k to reach the first level. Breeders have a budget, too! However, a good breeder can know Schutzhund and know their dogs well enough to evaluate temperament without the formality of a title. And unfortunately, Schutzhund titles are often fabricated and the dog isn’t actually trained well. So Schutzhund can be seen as a gray area and a matter of personal preference. And be forewarned, the price of puppies from Schutzhund titled parents is sure to be sky-high. Often, you can get the same quality from a good breeder at a lower price.

Ask: Can I meet the parents?

Often the father is an outside stud hours away which would make him nearly impossible to evaluate in person; however, you can still request videos of him. And it certainly helps if he has Schutzhund or show titles. Schutzhund—done correctly— usually weeds out those with undesirable temperaments. Likewise, dogs that are flighty or aggressive are disqualified from shows.

Meeting the mother is vitally important. If you are not allowed to meet or see the mother, there is something wrong with her and the breeder is hiding it.

The breeder may own a past puppy of one or both parents. See if you can meet them! And ask if the he/she has any health tests.

Ask: What do I get if my dog develops dysplasia or degenerative myelopathy? Do I have to return my dog?

Watch out for the term “replace”! Many breeders require the return of the dog that you have come to know and love in order to get a new puppy.

Ask: How long have you been breeding?

Evaluate: Does the breeder have positive testimonials?